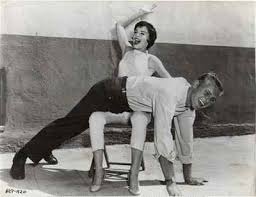 An innocent variation on a session from Saturday…

This was the third time I caught him; peeping through my window from my backyard when he thought I wasn’t paying attention. My neighbor you see, has wandering eyes, he’s harmless, but he’s a curious boy who taken special interest in me lately.

You see, during the summer I open the windows in my loft, though I do keep the blinds mostly closed for privacy. My place never gets all that warm, but I still enjoy the feeling of wearing silk negligee around the house to stay cool. It makes me feel sexy  to walk around in red satin, partially see though ensembles knowing that if someone were to look hard enough at my windows, they would likely see through my flimsy excuse for a set of blinds.  It’s something I had thought about, but I was surprised when I recognized the prying eyes to finally took me up on my R rated little peep show…My charming neighbor.

Don’t get the wrong idea, he’s the sweetest man you’ve ever met…polite, impeccable manners, and very very shy. I’m sure he wanted to tell me a long time ago that he could see inside of my loft, but how embarrassed would he have been!?! It’s better to just enjoy the view than to face confronting me. Truth be told I noticed him myself a few weeks ago, mowing the same spot in his yard over and over. I was on the couch in a pink teddy reading a book when I peered up from over the pages to see him squinting in my direction….. Ah….naughty neighbor….you want to see don’t you….but you’re too afraid to come and ask me….This was just the first of many occurences, though some would say I was luring him into this bad behavior.

I staged the day I would catch him, I had noticed him outside earlier setting up a new grill,  I figured I had time to catch his eye. A new black and white sheer  stocking and garter set with a lace nighty over it. I sat on the couch, blinds open, facing him…waiting for him to look up. It didn’t take long, 5 minutes maybe and I caught him like a deer in headlights. He froze – meeting my gaze from the other side of the glass….”gotcha”, I whispered waving him to come over with a gesture  of my finger.

A few seconds later I let him in, he removed his cap, balling it in his hands as his eyes looked everywhere around me except for my face….he couldn’t look me in the eye. How sweet, how gentle of him…I took pity. “You know, there’s nothing wrong with a little healthy curiosity”, I said. “A man like you shouldn’t be so clearly ashamed of wanting to see me dressed like this.”…he nodded bashfully in agreement as I stepped a few inches back to give him a good look. His eyes widened, his mind searching for something to say, but for me, no words were necessary.

“Oh dear neighbor, don’t be shy, I’ll tell you what…”I’ll let you spend some time here with me today and you can look at me all you want, if you let me spank you.” He nodded again in agreement with a cheerful smile, my proposition seemed to stir something in him…I just wanted to let him know he had to earn the privilege of peeping at me.

We walked over to the couch hand in hand, his belt unfastening in his shivering hands – “do you want me to take my pants off”…I smiled coyly, “of course I do….I’m going to spank your bare bottom, and your going to feel the stockings of mine while you are squirming over my lap.”…we both smiled as he positioned himself across my waiting legs. I’m stronger than he anticipated, grabbing his hips and raising them over my thighs so his naked ass was pointed in the air completely exposed and unprotected. I could see him smiling as he buried his face into my couch, I hit him softly at first, building up over what I wanted to be a very long experience. My hand came down over each cheek in a steady rhythmic pattern, creating a pink blush to his skin. I stopped to soothe his bottom with a gentle caress every few minutes, he coo’d each time I’d just lay my hand on his skin, but of course that’s when I’d continue my spanking. I think I had him over my knee for over an hour, disciplining him more because he chose to be secretive than to just tell me he wanted to watch me parade around in my panties. I wasn’t mad at him at all, I just wish he had been brave enough to come over in the first place.

I continued to redden his skin, making sure I got the portion of his upper thighs so he’d remember later on in the evening when he was sitting down to dinner. I giggled while giving him the last few smacks.  I knew this wouldn’t be the last time I’d have him over my knee….we both enjoyed this so much. A quiet home filled with the silly giggles of two adults – one of the naked and upturned, being punished, while the other gleefully slapping his white little cheeks. It was an innocent and enjoyable evening for both os us…

*Notes: due to the nature of this session, many of the real life details were removed – this posting was more to catch the boy I played with by surprise….you see my dear, I’ve caught you again….time for another spanking?

One thought on “Naughty Neighbor….”