If you aren’t caught up, start here first! 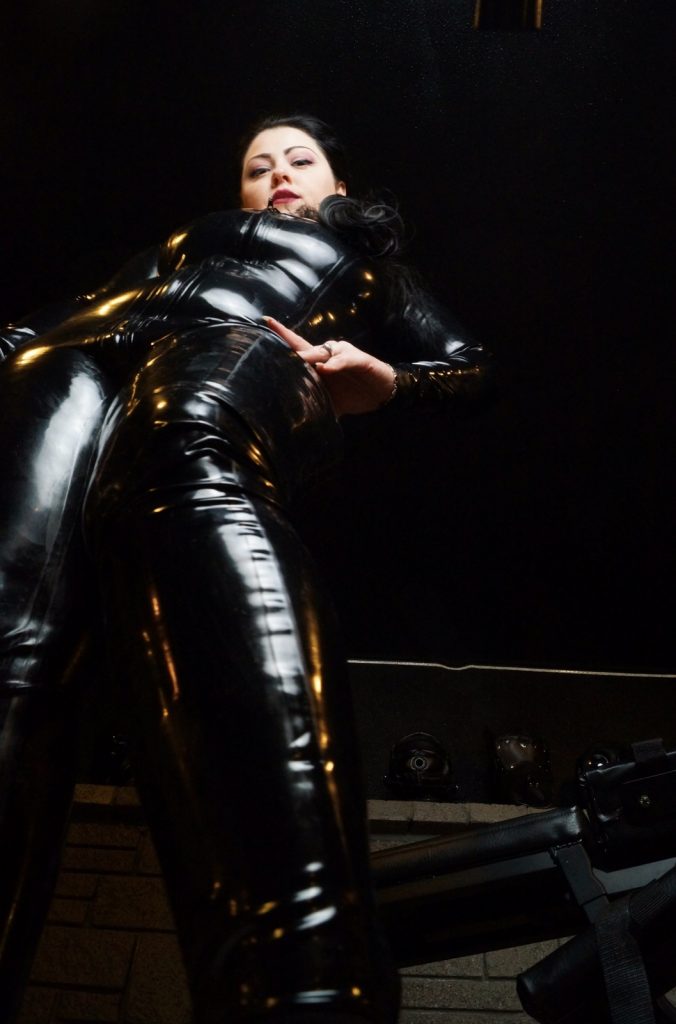 Willing though he suddenly was, my boy would NEVER be able to handle the thick throbbing erection from the trained bull behind him without some serious warm up; this didn’t stop him from begging for it, knowing that his compliance would not only bring him a deep, unexplored pleasure but also favor from the deviant women holding him hostage.

“Mistress, please, what can I do?” He whimpered.

“I’ll tell you what my dear, you are still 3 consumed climaxes from your goal. IF you’re able to take 3 full extractions from this bull using any one of your orifices, I will gladly count them towards you total…but you WILL need to take it, every drop – willingly, gladly and like the sweet little whore you are”, I purred back to him.

I took my turn first, inching into him slowly, the lace of my dress beginning to tickle the back of his thighs as I applied the most innocent amount of pressure against his waiting hole. Inch by inch, he opened wide to take me in, the vainy cock disappeared inside of him to a chorus of gleeful, panting moans and groans. He must have been so eager for his first REAL enforced bisexual experience, now just moments away.

We had toyed with the idea in the past – often flirtatiously talking about the possibilities, describing scenarios and cheekily coverings the ‘what it’s’ of surprising him one day, but until now we had never moving beyond the fantasy dialog and excited possibilities.

My captives eyes were fixed in the mirror at Devon, his hips writhing back and forth, body straining to take my thick tool as he feasted on the sight of the strapping man to his left. It was only seconds before Claudette made her way to his mouth, forcing her larger cock down his parted lips as we thrusted in tandem to break his gaze.

‘Do you want my husband to fuck you?’ she coyly mused. Her question met with indecipherable dialog as her own girthy dick rammed hard and fast into his mouth. He was obviously hungry for it, taking such big prods into his open holes with nothing but absolute desperate, wild enthusiasm. It’s not a sight I see often, such total abandonment to the moment, but we all knew he had just fully given over to the experience.

Devon had stroked himself into a raging erection, gently gliding Claudette to the side he took her place at his mouth, forcing the enormous throbbing tip into his wet lips. I continued to press In harder and deeper from behind as Devon picked up his own pace, both of us fucking our willing victim with all the intensity of two unbridled perverts tying to literally pound a man in half.

Locking eyes with me, I whispered one of Devon’s trigger words – a word I installed in his subconscious years ago when he was still in training for such nefarious celebrations. It was all too much for him, despite his usual perfect restraint, he released the full load of build up masculine need right into our hostages mouth without more than a few seconds of warning. I pulled away, admiring the panting, sweaty mess that had become of my boy as he swallowed hard.

‘I want them Mistress!’… the words split the air like a razor blade, years of fantasizing and now here’s my slut, wanting more, wanting all of it: real thing in abundance. Devon was already stroking himself up for round two…

He met my boys lips again, thrusting hard and fast with furious anticipation. The second bout is always much harder to reach, but being such helpful and generous women, Claudette and I provided a bit of an unspoken ‘show’ just in Devon’s line of sight. His wife, sweet yet so filthy, was bent over my knee, legs spread wide so the light would flicker off her gleaming slick pussy as I began spanking her perfect ass red. She loves otk punishment and he loves to watch – it was only past the warm up where her little perky ass had just begun to glow before another unannounced release ripped through him, hips shaking, every muscle strained as my boy sucking him dry.

He pulled away and came over to kneel in front of Claudette’s upturned backside, kissing it, licking it – sticking his tongue deep into her rosy pink slit until her scent covered his face. I pulled her legs open farther and held the back of his head in tight, forcing him against her hot swollen pussy.

My hostage in the background was stiff as could be and riding the air again, having enough time himself to recover and this racy escapade unfolding perfectly in the gaze of the mirror before him, he was like a race hose waiting for a starter pistol. Where did this mountain of willing energy come from?

‘Devon…go fuck him. This is what you’re trained for,’ I issued sternly to my bull.

I know I’m asking a lot, well, demanding really, but men enter my stable for two reasons. To be enslaved to be for a lifetime OR to be an unhindered sexual God. Adonis in human form, always ready, in perfect control, and able to continuously give or receive pleasure until I say otherwise.

His pride taking hold, hearing my words, he dutifully removed his mouth from Claudette’s hot little lips and stood up and stood to mount our squirming hostage.

“Beg for me”, Devon ordered.

“Oh Sir, there’s nothing I wouldn’t do for you to take me, PLEASE use me, PLEASE finish in me Sir, I need -“ he was cut off by the sharp insertion of flesh opening him wide and immediately as Devon pushed in to the hilt. For a brief moment, I expected a scream – it was hard, abrupt and deep, but before his own rhythm could be formed, out slut began to ride hard on the massive pole inside him. Never have I seen someone so cock hungry, so horny and so happy…. he took every pounding inch, leaking innocent dribbles from his own cock as the onslaught continued.

The tightness and genuine virginity made this all too appealing, everything about the moment and ensuing sensory overload for everyone in the room was too much, forcing Devon and our victim over one final edge… my slut made his ‘consumed goal’ but only on a technicality.

We all collapsed into the floor, undoing straps and downing ice water as our racing pulses settled. Not a single one of us could think straight – 10 minutes of silence passed before a word was spoken.

“Holy fuck”….my captive snapped me out of of my trance. “Mistress, you guys, that was amazing, this was totally amazing”. Claudette helped him to the shower as he continued to unwind praise for years of pent up desire in an instant realization that he had finally indulged such a deep and long held lust.

Claudette and Devon snuck upstairs leaving me to wait for my boy, a bit of merciful separation from the impromptu onslaught was in order.

He stumbled out of the bathroom about 15 minutes later, a bit glassy eyed and worse for the wear but a look of euphoria was painted across him from head to toe. It took a while longer to come down, his sub space raging hard, but eventually giving way to a calm, quiet relaxation as he recollected in my chair. He would make his flight after all; a bit used and worked over, but never happier.

Closing my door behind him way agony, Top drop of the highest level. The bliss of a fantasy of mine fully expelled, I didn’t have the energy to make it upstairs, but instead curled up on the nearest surface. Almost instantly, I drifted to sleep asleep in the warm glow of my red lights, happily…on the dungeon medical table.